Ultimately, sometimes everything can be weighed against you – but when you know it’s time to leap, you just need to do it.

Seven years ago I resigned from Merrill Lynch. I loved my time at Merrill Lynch; I loved the work, the energy, my colleagues and the challenge of investment banking. In fact, I had only just been promoted to Director in the Insurance & Pensions Solutions Group and I certainly didn’t know there was an inbound “Global Financial Crisis” around the corner. So why resign?

The reason for leaving Merrill Lynch was the dream of becoming an entrepreneur; a person who takes risks to create change. Whilst working at Merrill Lynch I was lucky to find my calling in my purpose and my business partner. In order to become an entrepreneur you need to recognise a need or a problem to be solved. By 2006 the pensions industry was already in crisis. A combination of low interest rates, high inflation, increasing life expectancy was soon to be followed by the most challenging economic climate for a century which would devastate final salary pension funds around the world. Most pension funds were closed to new entrants; many were facing a scenario where they would no longer be able to pay their pensioners and some were threatened with insolvency.

Resigning from Merrill Lynch to set-up on our own was a tough decision. Everyone we knew from family, friends and colleagues shared their apprehension. “We don’t understand you have just been promoted!”, “Don’t underestimate the power of the Merrill Lynch bull on your business card”, “Clients won’t meet with you”, “Even if you are successful your competitors Watson Wyatt, Hewitt and Mercer will block you out”. These were all good reasons to stay and not set-up Redington.

Despite the advice and apprehension I resigned and a few weeks later, in 2006 Dawid Konotey-Ahulu and I incorporated Redington and the “game was afoot”. We had begun our journey to challenge the status quo. In our FSA business plan we wrote “we wanted to do to pensions, what Jamie Oliver had done to school food”. We wanted to change the game. We asked ourselves “what if everyone felt confident about their financial future?”. Every day since then, our mission has been to shape and influence the future of pensions. However being an entrepreneur has required Dawid and me to confront the fear and discomfort of being in the world and saying “here we are, we built this”.

As Steve Jobs once said, “we are here to put a dent in the universe”, yet we also knew that purpose, determination and self belief was not enough to get us there. What we needed was a team, a Super Team. The great thing about being an entrepreneur and building Redington is the ability to decide who we work with to build a culture in line with our core beliefs.

Over the last 7 years Redington has grown to 54 exceptionally talented and collectively excellent colleagues. Team Redington is a true Super Team; well respected, with a great reputation and fun to work with.

Today, 7 years after leaving Merrill Lynch I feel privileged to have the camaraderie of team Redington as we collectively try to shape and influence the future of pensions with the prize of knowing that as a result individuals and institutions will be in control of their financial future and the next generation will be better off than the last. 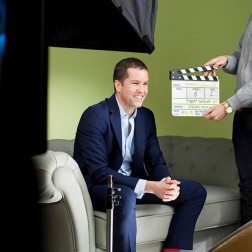