In this episode of the Dent Podcast I talk with Jean-Pierre de Villiers. Jean-Pierre is an absolute force of nature. He’s built his peak performance coaching business from the ground up to the point where it’s now a thriving six-figure company that deals with top celebrities and CEOs from all around the world. He’s also a wildly successful international speaker, is about to publish another book and has been voted one of the 50 most inspiring people in London. 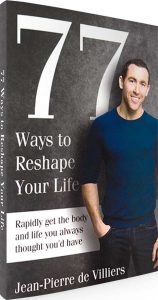 Jean-Pierre’s business philosophy is about far more than fitness. By focusing on the physical, emotional and psychological needs of his clients, his model is extremely effective at bringing people up so that they can consistently perform at their best.

This conversation is vital for anyone looking for new, innovative ways of challenging themselves both in business and in their personal lives. Jean-Pierre shares some top advice on how to transform yourself into a high-performing, enriched individual on all fronts.

Here are some areas we really get into:

77 Ways to Reshape Your Life Book