By 2025, Most Businesses Will Do Marketing Like The Trump Campaign - Key Person of Influence

By 2025, Most Businesses Will Do Marketing Like The Trump Campaign - Key Person of Influence

By 2025, Most Businesses Will Do Marketing Like The Trump Campaign

News broke this week about the cutting edge data techniques used to win the Trump campaign and the Brexit referendum.

At the heart of the story was British technology company Cambridge Analytica (CA) who used Facebook data to custom build micro-campaigns for individuals.

In order to create these micro-campaigns, CA extracted huge volumes of data from Facebook, ran that data through an algorithm and sorted people into hundreds of categories. The firm used the data to identify and exploit people’s weaknesses, hopes, insecurities, emotional “hot buttons” and political leanings.

Voters received highly content tailored perfectly to their psychological profile. For example, a person who feared changes to the healthcare budget would receive content directly relating to that issue.

It went even deeper than that. The psychological analysis of each user determined whether to use scary, fear-mongering content or more evidence-based arguments. It also determined the desired action – get this person out to vote or dissuade them from going to the polls.

Because the campaigns were so finely tuned to be seen by tiny audiences, there were no checks or balances on what could be said. Videos, blogs and status updates could be full of twisted misinformation and no-one picked up on it. The CEO of CA and the man behind the Trump campaign said: “It sounds a dreadful thing to say, but these are things that don’t necessarily need to be true as long as they’re believed.” More importantly than being believed, they’re acted upon.

In 2008, Obama leveraged social media in a way the world had never seen before. His website featured links to Facebook, Twitter (he has 100,000+ followers!) and YouTube. He produced regular bog and video content and his profiles interacted directly with voters. He social media influencers who coordinated their efforts using an online portal called the Action Centre.

At the time, this was cutting edge. No company or individual had been so effective online – he turned social media from a “silly thing teenagers use for posting drunken pics” into a powerful campaigning tool. Suddenly every business sat up and took notice of social media as a way to win hearts and minds.

Today it’s hard to think of a serious business that doesn’t use the tools that helped win the 2008 election for Obama. Most companies have a presence on the major platforms, most produce regular content and interact in real time.

Regardless of the debate on ethics, morality or fairness, the cutting edge tools that were used by CA will be commonplace and freely available to every business in less than a decade.

Now the genie is out of the bottle, we can expect to see the techniques used by Cambridge Analytica to secure the win for Brexit and Trump become commonplace in business by 2025.

Any serious businesses of any size will harvest data without people knowing it, run it through algorithms, micro-segment people and create highly campaigns that speak directly to each individual. 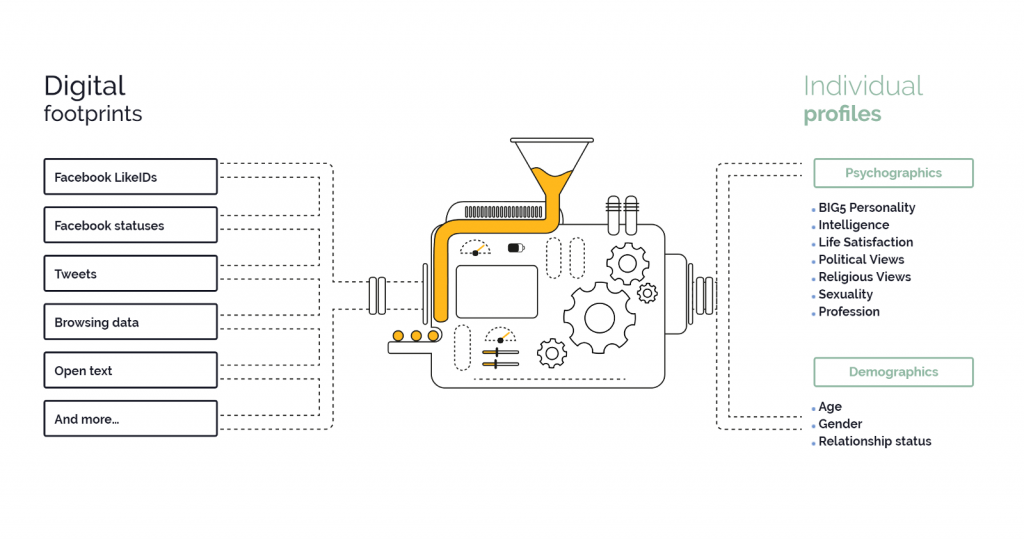 As people interact online and offline, it will seem that the world around them mirrors back their hopes, fears, goals dreams. The content won’t need to be based on broadly shared reality, it will be more important that it’s believed by the individual that consumes it.

Two neighbors living on the same street will see vastly different news, ads, content, and pricing. Things that seem “self-evident” to you based on your experiences and information available to you will seem “utterly ridiculous” to someone else who’s been fed a different story based on their psychological profile.

Businesses that aggressively harvest data, micro-segment it and produce ultra-targeted campaigns will thrive and those that don’t will struggle.

What’s more, consumers will demand it. As is the case with religion and politics, given the choice of knowing the truth, or facing a worldview that they aren’t psychologically predisposed to, they will choose the fantasy that feels right over the uncomfortable truth. No one wants to own up to the fact that views have been carefully shaped and crafted to suit the desired outcomes of a marketing executive in a distant boardroom.

Why am I telling you all of this? Because my algorithms told me you’d believe it.