How To Become The Cream Of The Crop In Your Industry 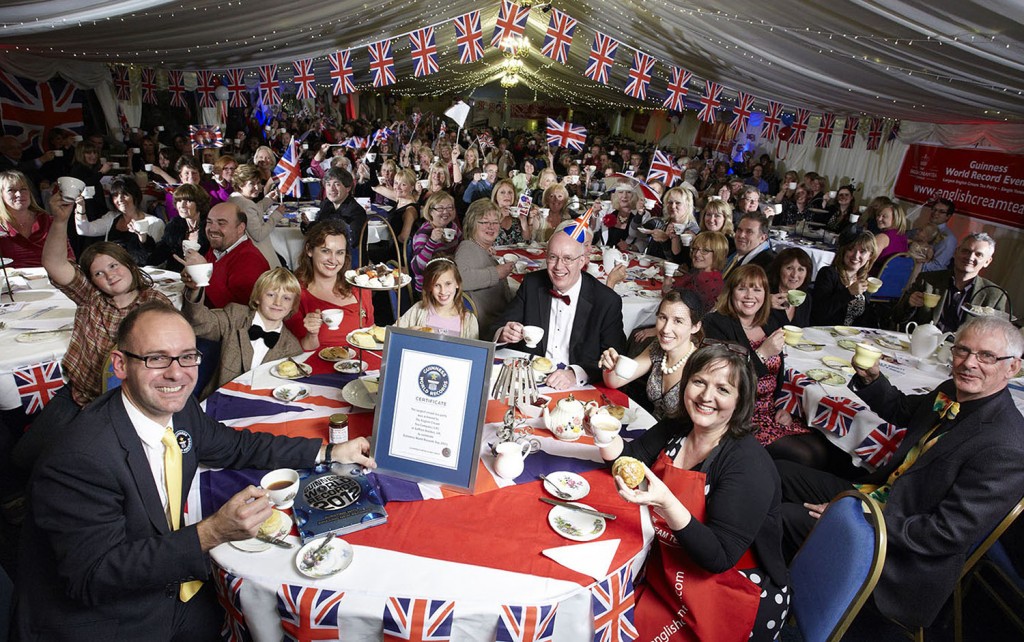 Jane Malyon has discovered how to have her cake and eat it too after scooping a Guinness World Record and indulging in the lashings of publicity that resulted.

Founder and Owner of The English Cream Tea company and Author of ‘Play nicely!: Best behaviour…in business’ Jane Malyon holds the record for hosting the most people to consume afternoon tea at once.

Now, with her company landing the top Google search term for ‘English Cream Tea’, Jane’s feeling all sorts of jammy about her business’s success.

So put your feet up and grab a ‘cuppa tea’ as Jane shares why she’s cream of the crop when it comes to being a Key Person of Influence in her industry.

1. WHERE WERE YOU BEFORE YOUR KPI JOURNEY AND WHERE ARE YOU NOW?

Hi – It’s Jane Malyon (Auntie Janey!) here and although I started my KPI journey as a coach, I ended it as the Chief Scone Gnome for The English Cream Tea Company! Coming up with the company idea was my Aha-lightbulb moment and it felt like all the dots of my life had at last joined together.  My destiny!

Originally, the company created freshly made hampers of Afternoon Tea or English Picnics, delivered to doorsteps all over the UK (the best gifts EVER!). We still create these chilled, delicious treats but found that we also needed to come up with ambient, long-lasting goodies that are easier to scale up business-wise and to get into retail outlets.  Hence we now have a range of fine teas and amazing preserves – all under a gorgeous brand (see www.englishcreamtea.com) that appeal to Anglophiles everywhere.

2. GUINNESS WORLD RECORD TITLE IS A BIG SCORE – TELL US ABOUT THE EVENT THAT WON YOU THE TITLE:

I’m delighted to say that after only a few months of being in business, Guinness World Records actually rang us to ask if we would like to set a new world record for the largest English Cream Tea in the world.  Wow – I enthusiastically answered “Yes” and put the phone down without asking nearly enough questions. I wondered if I’d just agreed to create the largest scone ever with gallons of cream and jam on top, or if it was the most people at a cream tea – was I now committed to feeding 43,000 people in one go?  Guinness clarified (luckily) and their interest was in at least a few hundred people simultaneously eating English Cream Tea in one location at the same time.

3. AND THE NITTY GRITTY, HOW’D YOU PULL IT TOGETHER?

It was all really only possible with the help and support of others, which luckily we had! Being brave enough to ASK for support really paid off.

People were amazing.  KPI folk were amazing.  My Facebook requests and Tweets were shared and broadcast everywhere.  I did Essex Radio slots from where I was on holiday in Vegas to spread the word in the region of the event. I approached scout groups, whole offices, business groups, schools and through the sweet support of others, our numbers gradually increased until we were in the ‘safe zone’!  The venue was donated, ‘Rodda’ clotted cream drove up from Cornwall to give us the cream, jam was gifted, a piano player volunteered, students baked, and video/photography/waitresses/signs were all offered for nothing – we even raised about £1400 for local charity too.

4. WHAT WAS THE AIM OF THE EVENT, AND HAS THE RECORD TITLE ACHIEVED THOSE GOALS?

The aim of the event was to raise awareness and publicity for our company, both locally and further afield.  Well, we achieved that in a way we could never have imagined.  Because Guinness included us in their top 3 favourite records of the year, we were heavily promoted by their publicity machine.  Within a couple of days, I kid you not, if you wrote the term English Cream Tea into Google, 28 solid pages came up about our record! We were, apparently, front page of South West Pretoria News, the Calgary Times and all manner of worldwide newspapers or online sites that we’d never heard of.

5. DID ANY OTHER OPPORTUNITIES POP UP?

Well, the residual benefit is (and I hope I’m not speaking too soon) that we currently seem to ‘own’ the space around the generic term English Cream Tea. It’s several years since the record took place now but have a look on Google if you put those three words in, it ought to lead you to a description of scones, jam and cream really.  However, usually WE are number one, above Wikipedia, above Fortnums or The Ritz or scone recipes or Cornwall/Devon.  That’s another unexpected benefit we couldn’t have foreseen!

6. WERE THERE ANY KEY LEARNINGS FROM THE EXPERIENCE?

Yes: to ask questions before jumping in!  My enthusiasm for life isn’t always the same as my Best Business Head!  So I could have clarified sooner exactly what Guinness wanted and what would have to be true for them to feature it with a photo in their Album. Once I found out they needed a real spectacle, I was on the case with bunting, flags, guests dressed up in finery etc.

Also, to ask upfront about any costs involved.  We came to adore the team from GWR (still do) but were very shocked to receive an unexpected bill less than a week before the event for something like £6000.  WHAT?  We managed to persuade them otherwise, but apparently they do usually charge for attending an event to verify it.  They must know the PR value that a world record can hold – and therefore can justify their costs – but it was a Vegas shock for me.  Ah, the devil’s in the detail.

7. HAS THERE BEEN A MOMENT WHEN YOU STARTED TO REALLY FEEL LIKE A “KEY PERSON OF INFLUENCE” IN YOUR INDUSTRY?

We have received quite a lot of publicity interest, rather than the other way around, and that’s always a lovely bonus which makes you feel a bit of a KPI!

Additionally, WorldPay have sort of adopted us as their featured brand in all sorts of publicity (and I have enjoyed their lovely hospitality at woman-of-the-year type of events) and even Essex County Council approach us if they want to put on an especially British-themed event.  I’m asked to be on judging panels, give speeches and do guest blogs and interviews quite often too, all of which is fun, and I’m even having Afternoon Tea in London as a special guest next week which will be delicious!

People also think they ‘know’ me and the brand seems familiar to them.  If hubby drops me at a supermarket to just pop in for some butter, it can take half an hour because people come up and talk to me!

8. WHAT’S YOUR FAVOURITE THING ABOUT YOUR BUSINESS?

Can I only choose one favourite thing?  I suppose it’s that we post or deliver our English Cream Tea products, they are like hugs-in-a-box, and that makes me very happy. We include people’s gift messages and get to see the notion behind the treats being sent:  ‘thank you for saving our bacon’ or  ‘congratulations – wonderful news’. One message was super-poignant: ‘Please enjoy your afternoon tea at 4pm and we’ll raise our cups of tea to you at that exact moment’ (and the back story was that five ladies had met at the Savoy every year for a decade, but this year one of them had had a brain tumour and couldn’t travel).

Every order we take is guaranteed to provide a smile – that’s my favourite.

9. WHAT KEY STRATEGIES HAVE MADE THE BIGGEST DIFFERENCE TO THE SUCCESS OF YOUR BUSINESS?

I think the word TEAM is the main one.  I began the company with a budget of zero, so initially built The English Cream Tea Company team with shareholders and family plus a wing and a prayer!  I’ve also asked others when I don’t know what to do (and there’s a LOT I don’t know about) and additionally, I’ve enjoyed almost every minute of growing the business (except for the few bits that are scary and the very annoying side of bureaucracy!)

10. WHAT ARE YOUR TOP TIPS FOR OTHERS WANTING TO GET A GUINNESS WORLD RECORD TITLE?

Tweetable kudos: (copy and paste to your Twitter)
Dollops of kudos to @janemalyon of @englishcreamtea on scooping a #GuinnessWorldRecord for hosting the world’s biggest #AfternoonTea