How To Use The Critic To Your Advantage 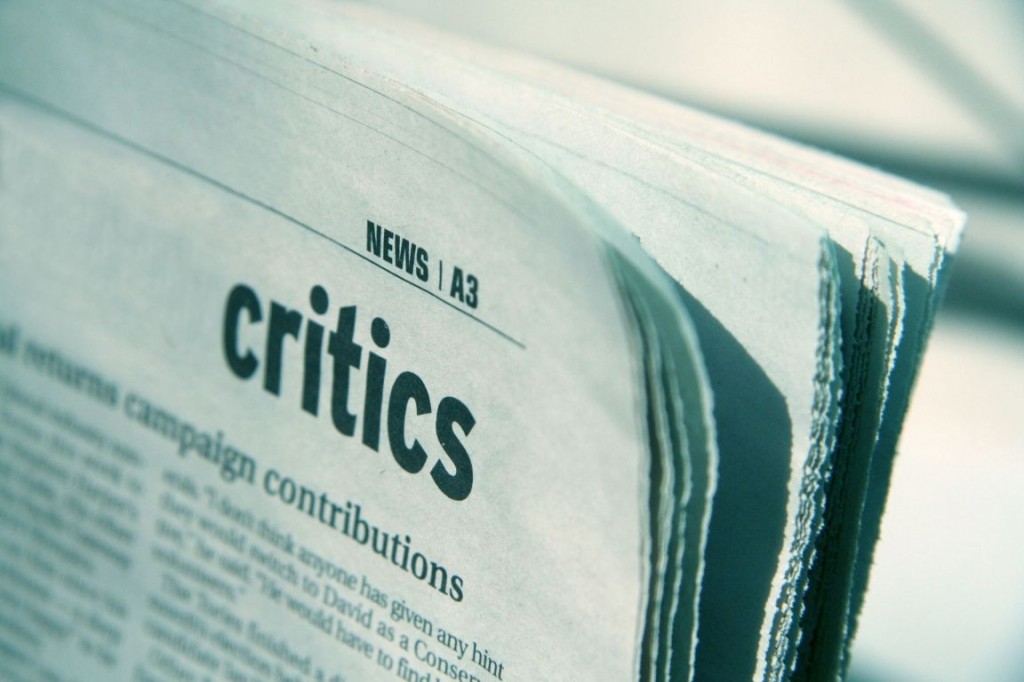 Theodore Roosevelt once said ‘It’s not the critic that counts.’

It is part of a longer text which is worth a read for anyone who’s striving to do anything of merit in the world (included in full at the bottom). Some people say that Teddy wrote it as a ‘comments guideline’ for the interweb, but that could just be rumour.

Whilst Roosevelt was pretty bang on the money, there is stage of creation where it’s worth actively seeking out criticism.

As a young and enthusiastic entrepreneur, I used to do some ‘market research’ before I built a product. Sometimes this research would ‘stretch’ to asking three or four friends, “What do you think of this idea?”

My ideas were of course utterly genius and the answer would always be “great!” Market research done and my first three or four clients practically guaranteed I would then invest a ton of time, money and effort building the product.

For some reason, whenever I went back to those three or four friends to ask them to buy it, it was always the wrong colour, they had no budget, they were busy ironing the cat, et cetera, et cetera.

1. Separate yourself from the idea

We’re used to having to ‘sell’ ideas but that is not what you’re trying to do at this point, you’re trying to get useful feedback. You may well think it is a genius idea, but when you first put it out into the marketplace, distance yourself from the idea. Frame it as one of many ideas you are considering at the moment.

If this seems hard, it is. But it is not nearly as hard as realising you have wasted years of your life working on a project the market doesn’t want. It is also very good training for when you need to detach yourself from your successful business later in life so you can make objective decisions about the future.

2. It is the critic that counts

Most of us like to get validated that we are doing the right thing. So we go out looking for reassurance that our ideas are as good as we think they are. Fortunately, most people are friendly, they don’t want to hurt your feelings and they will gladly give you some reassuring words.

Unfortunately, in the scheme of things, this is worthless.

You must actively go into the market place, talk to your ideal client and look for everything that is wrong with your product/idea/business. You must ask questions like, how could this be better? Why won’t this work? What is the most likely reason this will fail? Who is already doing this better? Top five reasons you wouldn’t buy this product. And the most painful: why wouldn’t you buy this from me?

Now, as you already know from the point above – you are not the idea. Therefore, the feedback they are giving is not a reflection on you, it is just useful information. But it won’t feel like that. The reality is that you are vested in the idea and you already believe in it to a certain degree, otherwise you would not be out there getting feedback on it.

You know those ‘FAIL –compilation’ videos that stream across the Internet? That is what your life is going to feel like at this point. Except you’re not laughing at it, you are the star of it. You are recipient of every chair that collapses, every bucket that falls on your head and every dog that knocks you off your bicycle. I empathise with you, I really do, this is a painful step to go through.

And I’m going to make it worse. You will ask for feedback on what is wrong with the product and you will get some idiotic answer about what is missing from the product. Every single fibre in your body will want to shake them and scream at them “You moron, that’s in the feature list I just showed you!!!”

…but instead you will say ‘Yes, and?’ and you will bite your tongue as they warm to their role and start adding more things that will make your product fail.

You could be forgiven at this stage for thinking you have a pretty water tight solution. Sadly, that’s probably still not the case, so here comes the toughest part.

Having incorporated all that you have learnt from step 2 back into your design brief, you are going to go back out to the market to try and sell the new idea.

Note, you are still selling an idea, not the product. The product should never be built until you have investment or buyers. The only real validation for your ideas is money in the bank. So whether it’s a potential client or a potential investor, your job is now to start selling your idea.

I have recently gone through this process with a new product we’re launching. It gets no less painful with time hearing someone rip your ideas to shreds, but by incorporating the feedback into the design, the product is better and the pre-sales become easy.

What makes it especially hard to follow this advice is that we don’t see what goes on behind the scenes in other peoples lives. We see the entrepreneur that does the amazingly successful product launch and we look for clues.

What we see is they have an amazing website, so we invest money in an amazing website like theirs. They have a Tumblr account so we create one too, but we don’t see everything that went before that and consequently we rarely get the results they do.

As hard as it is, now is the time to embrace the critic.

“It’s not the critic who counts. It’s not the man who points out how the strong man stumbled. Credit belongs to the man who really was in the arena, his face marred by dust, sweat, and blood, who strives valiantly, who errs to come short and short again, because there is no effort without error and shortcoming. It is the man who actually strives to do the deeds, who knows the great enthusiasm and knows the great devotion, who spends himself on a worthy cause, who at best, knows in the end the triumph of great achievement. And, who at worst, if he fails, at least fails while daring greatly, so that his place shall never be with those cold and cruel souls who know neither victory nor defeat.”  – Theodore Roosevelt, 26th President of the United States.

This article originally appeared at: Thenextweb.com