The #eggfreezing topic is one that fuelled many debates when last year Facebook and Apple announced their new initiative for senior female employees to have the option of egg freezing. It might seem as if this is an admirable company perk from an employer who truly cares about their staff, however egg freezing can hardly be suggested to be the solution for fertility issues that are abundant with many career women.

Many women are choosing to have children later than the previous generation for financial, career and relationship reasons. Freezing eggs in their 20s could mean higher quality eggs for when they end up having babies 10-20 years later, but egg freezing can cost tens of thousands of pounds.

Whilst a company absorbing the high cost of egg-freezing takes the pressure off the woman who would like to maximise her future chances of a family, there are many other complications to consider. The more intervention that is needed to conceive, the greater the financial, emotional and physical cost. There can be greater risk of congenital issues such as Down’s Syndrome or greater complications in pregnancy and birth. Support with parenting often comes from grandparents, who are then at an older age themselves which puts more strain on them.

There are a number of issues that I see with my clients. It’s not just a question of age, but seniority within a company can also mean more stress, longer working hours, more travel etc. All of these factors can make it harder to eat well, sleep well and exercise in a way that will support fertility. Often when they are trying to conceive, life is so full that they just can’t slow down enough to give their bodies a chance to catch up.

There is often a pull between returning to work and staying at home – with many women feeling like the ideal solution isn’t available. Surely flexible initiatives so a working mother can still feel challenged at work but supported to be a present mother should be more available? I recently treated the baby of a Swedish couple who were in London for a year. The mother took the first year of her baby’s life as maternity leave, and when the family returned to Sweden the father was taking his year of paternity leave. I was really impressed by such a progressive system, and perhaps flexible working is what should actually be on the agenda at Facebook and Apple. 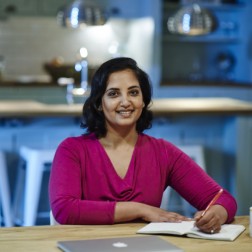